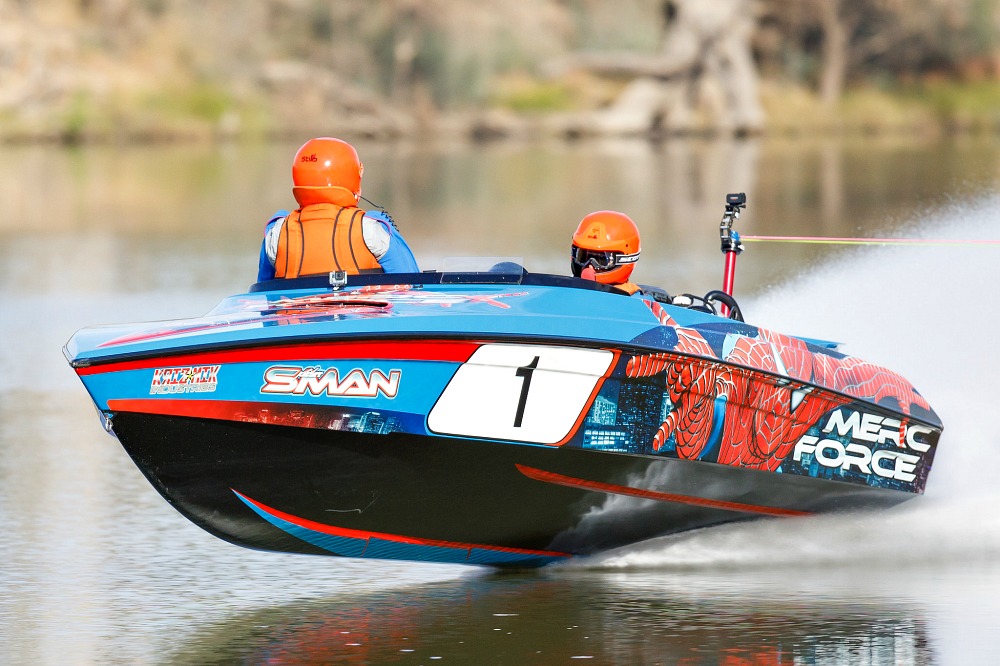 Mercury-powered boats have claimed the Superclass title and 13 other crowns in a dominant performance at the Mildura 100 – the world’s fastest ski race.

Across the Saturday and Sunday of the Easter long weekend, the best ski racers from around Australia tore along the curving 100 kilometre Murray River course watched by thousands who saw Mercury engines rack up win after win.

The Superclass and Outright double was claimed by the mighty Merc Force. Driver Don Gulley, observer Kevin Boylan and skiers Jake Tegart and Kristofer Knights finished with a two-leg total of 31 minutes and 11 seconds – more than 90 seconds clear of the field and averaging a fraction under 200 km/h.

Powered by Mercury Racing’s simply awesome 1650 QC4V power plant Merc Force crossed the line just 13 seconds short of the race record to give the team its third major victory of the season, following the Sydney Bridge to Bridge and the Southern 80.

Velocity Racing, Ballistic Still, and Totally Mental finished first, second and third in the Unlimited Outboard, each powered by an OptiMax 300XS.

In F2, it was Enforcer, Showbiz and The Hulk took the honours, all pushed by OptiMax 300XS outboards.

And in Unlimited Outboard Social, it was all OptiMax 300XS engines once more, successfully driving Velocity, Adrenalin and Below Zero to gold, silver and bronze.

“What else can you say other than it was a brilliant weekend of ski racing,” said Peter Massina from Mercury Racing Australia/New Zealand. “At a headline event like the Mildura 100 every win is cause for celebrations but special congratulations to the everyone behind Merc Force, Pig’s Arsenal and Merc Force F1 which were simply outstanding.

“Races like this are in Mercury’s DNA – we love it.”