Winter works scheduled over three-week period for the Mildura Weir 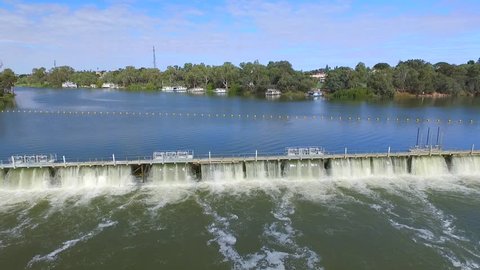 Water level will fluctuate dramatically on both sides of the weir.

Currently we have a limited number of houseboat spots left, so please contact us on 0350227596 as soon as possible to book in or discuss your options.

Essential maintenance works will be conducted at the Mildura Weir from 12 July, which will involve lowering the river level in the weir pool and closing Lock 11 for about three weeks, the Murray–Darling Basin Authority and Goulburn-Murray Water announced today.

MDBA Executive Director River Management, Andrew Reynolds said Lock 11 was one of the busiest on the Murray River, so timing of the works was agreed after taking on board feedback from tourism operators, irrigators, and the Mildura Rural City Council.

“The Murray River is vital to the region’s economy and recreation, so we have scheduled the works to begin after the school holidays but before the irrigation season to try to minimise the inconvenience to the community as much as we can,” Mr Reynolds said.

“It is critical that river infrastructure is kept in the best possible condition to protect workers and visitors and to support all the communities and industries that depend upon the reliable operation of the River Murray.”

Goulburn-Murray Water’s Storage Operations North Manager David Irvine said the works are expected to take three weeks to complete, including six days to lower the weir pool and six days to refill it.

“We will be commissioning a new winch dedicated to the site and replacing three of the 24 trestles that control the water levels at the weir. The last time refurbished trestles were installed at the Mildura weir was when the weir was reinstated after flood flows in 2016,” he said.

“When work is done on a weir it usually means more water is released downstream to reduce the height of the river immediately upstream in the weir pool. We expect the upstream river level to drop by around 3.5 metres in July, exposing the riverbank, but this will depend on the flow rates in the Murray at the time.”

“Boats and other river vessels will not be able to pass through the lock after 4.30pm Tuesday 13 July. Access by foot to the Lock Island recreation area will be closed during the works.”

Boat operators, river pumpers and other river users are encouraged to take the lowering of the weir pool and lock closure into account when planning their activities on the river.

Weirs are structures across the river that hold back water to create a pool that can extend several kilometres upstream. They enable greater control of the flow in the river and provide a more predictable supply of water to local townships and industries.

The Mildura Weir and Lock 11 are operated and maintained by Goulburn-Murray Water on behalf of the Murray–Darling Basin Authority.